In honor of the March 11 patron holiday of the Kriva Palanka Municipal Reserve Officers Organization, the Mayor Mr. Arsenco Aleksovski addressed the attendees at the ceremony held on this occasion. He noted inter alia:


"The organization of reserve officers with their activities primarily contributes directly to strengthening the country's defense system through education and training of its members. With their activities they participated in exercises, lectures, state competitions where they won numerous awards and awards. However, reserve officers at the municipal level, with their expertise, also make a major contribution to the level of local self-government especially in the area of safety and protection of the population and material goods in case of natural disasters and other accidents. " 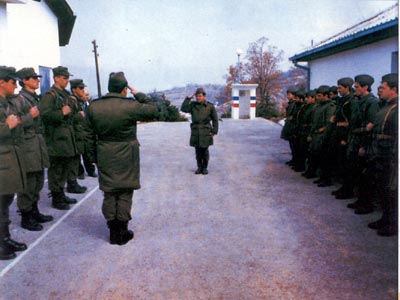 The ceremony was held on the occasion of the 18th anniversary of the border crossing of the Republic of Macedonia. Macedonia. On March 11, 1992, Kriva Palanka TO Crown Dust Watchtower & #8220; Flat Field & #8221; at the Macedonian – Bulgarian border.

The full speech of the Mayor can be downloaded from the link below.